Is this physics or simple math?

I’ve been thinking a lot about how a part fits with a whole lately. Not as in ratio, but the Aristotelian thought that a whole is often greater a sum of its parts. Human beings are a great example: we’re made up of a collection of cells and proteins and electricity, but a hand is so much greater than five fingers, some bone and some skin. Likewise, a human being is so much more than two hands, two feet, and various other body parts. You see what I’m saying? The whole of a human being is so much more than the parts.

Another example, this time from chemistry:

Water works that way too, doesn’t it? It’s three molecules: two hydrogen atoms and one oxygen atom; but when they bond, they sustain life. One droplet may not have an overwhelming power, but collectively, those molecules can move mountains. Their strength is in the collective – when they gather, they are very nearly unstoppable. We’ve all seen those molecules sweep away houses, collapse mountainsides into the ocean, and carry away cars like they are corks bobbing in a bathtub.

One more, from everyday observation: 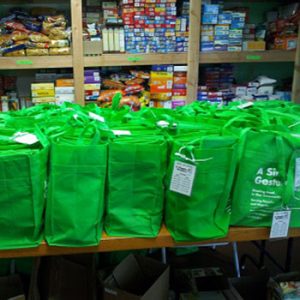 Your contributions to A Simple Gesture are a similar thing. One bag makes a difference, yes, but it won’t end hunger in Guilford County. The power of the bag comes when your bag combines with your neighbor’s bag, and her neighbor’s bag, and so on until they create a sea of bags that contain thousands of pounds of food for your neighbors who are hungry.
I witnessed this collective generosity phenomenon twice last week: with the Hamilton Lakes Lions club outside Wal-Mart on Saturday, and at Day Star on Tuesday. One person may donate a couple of cans of tuna, but when everyone does a little bit, the result is overwhelming! The congregation at Day Star donated over 4,000 pounds of food after two consecutive Sundays. Similarly, I stood outside Wal-Mart on a brutally cold Friday morning to exhort shoppers to buy an extra item or two to donate to the food pantry. Most shoppers added one or two items to our box. By the end of Saturday, the kind shoppers at the Wal-Mart Neighborhood Market collected 4,000 pounds for Backpack Beginnings. One jar of peanut butter? Merely a droplet, but 50 jars of peanut butter? Now we’re moving mountains!

Come on, join us!

This phenomenon is one I’ve witnessed multiple times since I began working with A Simple Gesture, but it’s one that overwhelms me every time. You can join us on this mission to end childhood hunger in Guilford County. When we each commit to do our part, the collective total is so much greater than the sum of its parts. It takes on an energy, a momentum, it resonates. You can certainly feel it, and maybe, if you listen closely you can hear it. It sort of sounds like the ocean, or a heartbeat.

It’s just one bag, every other month. Your bag, combined with all the others, will go to feed children and families who are short on food for the month.  Sign up to get a bag. Can’t shop? Donate a bag. You want to do good. We can help.